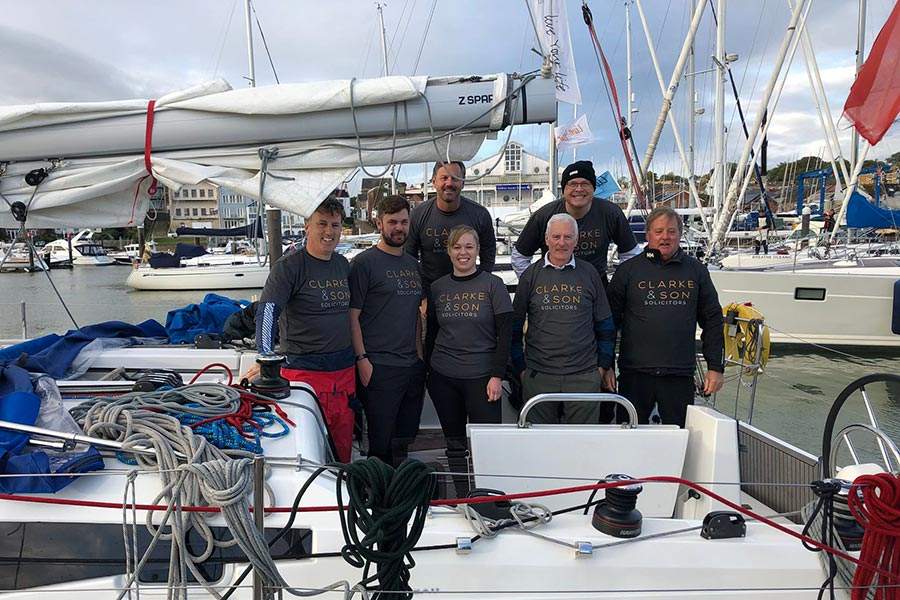 It is well known that the drinks and hospitality sectors were, and remain, amongst the hardest hit by the Covid-19 pandemic. Some businesses have, sadly, not surviving and, even now, many more feeling the continuing effects. It was no surprise that the Drinks Trade Regatta was cancelled in 2020 and so having the event return in 2021 was a very special moment and one of which it was a privilege to be a part of.

The regatta has been a fixture in the calendars of industry businesses for many years and Clarke & Son has been involved each year since being first invited back in 2016. The event is based at Cowes on the Isle of Wight and takes part in the waters of the Solent over three days, with a series of races each day.  Each team is given an identical boat, crewed by teams of up to 11, which leads to exciting, close-quarters racing. Pre-pandemic, the event enjoyed around 20 different participants made up of well-known breweries, pub companies and industry service providers.

As well as the sailing, which tends to get quite competitive, the event gives friends in the industry the opportunity to catch up and network, especially in the evenings where the teams come together for dinner and drinks parties at venues in Cowes including the Royal Ocean Racing Club and the prestigious Royal Yacht Squadron.

Whilst being a very social and fun event to be involved with, there is another side to it, with each team contributing £1000 to a charity pot. The top three teams at the end of the event being able to distribute a proportion of the charity pot to their nominated charity. It was quite remarkable, and a testament to the business and people involved, that despite the difficult times the industry has suffered, each team contributed to the charity pot in the same manner. Another regular entrant, who could not make it to this year’s event, even contributed £1000 despite not taking part.

The event is usually held in May but due to concerns at the time, was pushed back to October for this year with, understandably, a smaller fleet than usual.  Clarke & Son’s crew consisted of partners, Will Anderson and Claire Redhead, and a number of industry clients as well as a professional skipper and first mate. Team Clarke & Son’s best finish overall was fourth place back in 2019 which involved a 2nd place finish in the Flower Cup race on day two of that regatta.  With some experienced sailors included on the boat this year, it was hoped that 4th place could be bettered.

The first day of sailing and practice had to be cancelled due to exceptionally high winds, leaving the teams slightly underprepared for the start of racing on day two. Despite this, Clarke & Son managed to finish second in all four races. Despite some initial disappointment on board that we could not have cemented a couple of wins from good positions, the team was in a good position for a top-three finish in the final standings.

Day 3 consisted of three races, the last of which was significantly longer and finished towards Portsmouth Harbour.  There was initial confidence on board that the team could go one better and win at least one of the races on the final day.  Unfortunately, after a poor start, the team could only recover to third place. Determination intact, the team again fought back from a poor start to finish second in the penultimate race, all but assuring them of a top-three placing overall.  Will Anderson took the helm for the final race of the regatta.  Crossing the start line in 5th place, there was some early work to be done.  After rounding the first mark in fifth place, the team made the right call in positioning the boat to make maximum use of the wind and tide on the mammoth downwind reach to the second mark, just managing to round it in first place.   The team held their nerves to take victory in the final race, The Christie & Co Challenge Cup. As well as the race trophy, this cemented second place overall, ensuring that the team were able to contribute £2300 to Clarke & Son’s nominated charity, Sebastian’s Action Trust, a local charity supporting families with seriously ill children, making sure that their lives, however short, are lived to the full.

The Drinks Trade Regatta is always a rewarding experience, wonderfully organised and made even better this year by having the chance to allocate some of the charity prize pot to such a worthwhile cause.

We look forward to taking part in this fantastic event again next year.